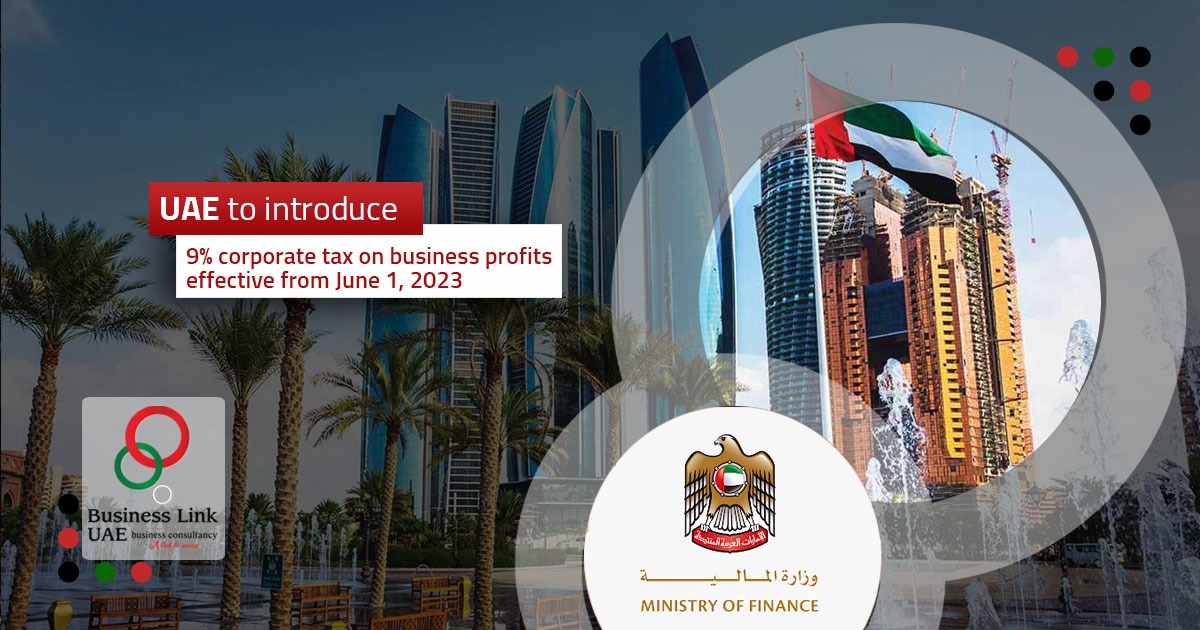 UAE, known as a tax haven, is going to roll out a 9% federal corporate tax. This new tax system will come into effect from the financial year starting on or after 1st June 2023. The UAE Finance Ministry has officially announced it on Monday – 31st January 2022.

With this landmark decision, it’s very clear that the UAE wants to modernize the entire economy and accept international tax norms. Moreover, the corporate tax structure has been designed to minimize the compliance burden over the ‘N’ number of businesses that will be covered under the tax regime.

However, the UAE Government already introduced VAT on almost all goods and services in 2018 at the standard rate of 5%. Now it’s going to introduce Corporate tax at 9% on all commercial and corporate activities. Only the extraction of natural resources has been kept subject to the emirate level taxation system only.

Moreover, the UAE government has also taken care of small businesses and startups by applying no tax on the profits up to DHs 375,000, i.e. ($102,107.50). However, no tax burden will enforce on the individuals as well as on their income that arises from real estate and other investments.

According to the UAE Finance Ministry, the new tax regime will be the most competitive in nature globally. It will also be in line with WTO (World Trade Organization) rules and regulations.

There are two most eminent things explained. First, taxpayers must file only a single tax return filed in a financial year. Second, no advance tax payment is required. These will give easy compliance submission to the taxpayer.

Corporate tax is the second landmark decision of the UAE Government to put the nation’s growth engine on a fast-track mode. It is an established aspect of the world economy, the fast development, and growth of any nation are based on its tax structure. The UAE has picked up that path for four years by introducing VAT.

At present UAE is not an emergent hub to invest in. It is the most reliable and attractive investment hub with utmost transparency. The rectifications and relaxations applied in the current compliances may create a magnetic sphere for the investors.

To reshape the tax structure of the UAE Government following International norms of the taxes. The primary purpose behind this is to modernize its economy and remove loopholes that become obstacles on the path of a fast economy.

The Government had kept the competitive tax rate too low, strengthening its fiscal pattern. It follows the minimum tax rate policy over the corporates to lead the world economy as natural progress.

Perhaps the UAE has picked up at the right time. And it will pick The sharp role of the UAE to boost its own and the world economy on remarkable maturity within a couple of years.

Will individuals be subject to the UAE Corporate Tax regime?

The income earned by individuals that don’t arise from business or commercial activities and income earned from employment, real estate, and other investment will not be part of the corporate tax structure.

The business income generated from the extraction of natural resources, i.e., oil and gas production, will attract no corporate tax. Instead, they are subject to the emirate level tax system only.

Moreover, no business has to pay taxes on capital gains and dividends received from the respective shareholdings. It also eliminates the double taxation system as foreign taxes are able to set off against UAE corporate tax.

Along with implementing a new tax regime, the UAE Government has also stuck to its earlier proclaimed transparency in international tax policy. The said move is remarkably overcome when the neighboring Gulf country like Saudi Arabia is being more liberal. It provides the pillar to attract Foreigner to Investment in Saudi Arabia, wishing to shift their headquarters to the Kingdom.

The UAE also announced the Friday-Saturday week ending last month. Thus, the UAE Government is ready to synchronize with the economy at an international level. UAE has kept the federal corporate tax rate lower than other gulf countries that of 20% in Saudi Arabia, 15% in Oman, 10% in Qatar.

21.3% – 27 European Union countries, 23.04 % – Organization for Economic Co-operation and Development countries, 69 % – Group of 7 countries. The UAE Government proposes the rate of 9% as corporate tax is not only law but quietly the lowest. Definitely, the threshold limit of taxability is quite lower (3,75,000 Dirhams). That’s why chances are too much high that many companies will come under the tax regime.

Of course, the decision to impose corporate tax will strip the tax-free status of the UAE. However, the rate @ 9% will affect “Nil” to existing free zone operators. Entrepreneurs covered under the 9% slab will have to scrutinize for minimizing their tax liabilities.

So all in all, the scenario at the outset of UAE Government Officials’ declaration to impose Corporate tax indicates an honest endeavor and eventually a handy step that represents the synchronization with the global economy.

It will definitely boost the economy of UAE as well as of the world. The bold step taken by the UAE will help it to climb on the pick of the global economic leadership. Ultimately, we can foresee the possibilities of drastic upwards change in the entire economical ratios of the world economy.

For more info, stay connected with us